The discovery of alien life may be close. How will religion survive it?

Encounters with new worlds and new life will present religions with the ultimate theological conundrum. But they will adapt, as they have done before 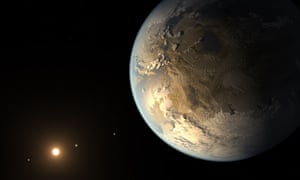 About two decades ago, it was quite uncertain whether stars other than our own sun even hosted their own planets. However, according to Nasa, the latest count of confirmed exoplanets stands at around 3,500 – and at least six of them are potential Earths. This count will definitely go up and many researchers believe that the advancement of technology will enable humans to discover some form of life on another planet in the coming years.


Understandably, these discoveries will kindle questions about Earth’s place in the universe. Moreover, contact with intelligent life elsewhere in the universe will present theological and philosophical conundrums that many religions will find deeply challenging. This is especially true for Christianity, which primarily focuses on humankind – and teaches us that God created man in his own image, and all other animals and plants were created for mankind.
The interaction with alien life is not just being discussed in the domain of philosophy any more, it has entered into the traditional scientific realm. Realising this possibility, Nasa, in 2014, gave $1.1m to the Center of Theological Inquiry, an independent institution, to support an initiative to study “the societal implications of astrobiology”. Nasa was criticised by some for providing money to an organisation rooted in Christian theology.
The idea of infinite space with the infinite glory of God originated with Nicholas of Cusa, a German philosopher who kept his infinite theology within the Catholic framework. In 2017, such philosophical thoughts have given way to practical science – three scientists in the field of exoplanet science have been named in Time magazine’s annual list of the 100 most influential people.
The core question would be, does God’s creation extend beyond a single planet? If so, would the inhabitants of those planets believe in the same gods as humans do? How could the creator of the universe deny the inhabitants of those worlds a chance to redeem their sins? Does that mean that God incarnated as Jesus in those worlds contrary to Bible teachings that say that the redemption in Christ was a unique event meant for humans on Earth?
You could make a very strong case for institutional religions surviving the discovery of alien planets and the ensuing tussle with exotheology – a term that describes theological issues as related to extraterrestrial intelligence. These institutions have always shown an amazing ability to remain relevant. Whenever they encounter a new paradigm shift, they come up with interpretations from scriptures that justify their own existence. There is also, quite simply, something special about religion that resonates with humans on a fundamental level.
For traditional religions and religious institutions, the desire to expand their material wealth and power has often take precedence over the spreading of theological doctrines. This has often led to a culture of exploitation, of both people and the planet. This perhaps explain why the Copernican revolutionor Darwinism didn’t displace the religious order in a significant way in the past. The religious elite on Earth will derive the courage and determination to pursue their goals from this material world even if they are convinced of the existence of multiple universes that operate under different laws of physics.
The triumph of these institutions is analogous to the audacity of organisms when facing challenges in nature. Religious institutions possess impressive survival skills, greater than individual human abilities. They also have their origins in personal and emotional needs – and for many, they will continue to offer those requirements.
Yet, this personalised religion became a complex organism with ambitions to control society and wealth. A recent Pew Research Center study found that the growth of major religious groups would outpace the rise in the religiously unaffiliated population, despite trends in the US and other western countries, where the proportion of religiously unaffiliated people is expected to grow.
So, how could we resolve the theory of many worlds and their many gods? We can be certain that earthly religions will not accommodate the alien gods. Perhaps we should turn to the astronomer Carl Sagan, who wrote in Cosmos: “Meanwhile, elsewhere there are an infinite number of other universes each with its own God dreaming the cosmic dream. It is said that men may not be the dreams of the Gods, but rather that the Gods are the dreams of men.”