The fine art of medical diagnosis

Making 'ward rounds' at the National Gallery, doctors have uncovered murder, syphilis and all manner of ills

A Satyr Mourning over a Nymph by Piero di Cosimo, c.1495. Photograph: The National Gallery

At the Sainsbury Wing of London's National Gallery, in Room 58, a painting by the 15th-century Italian artist Piero di Cosimo of a woman lying on her side has been hung opposite Botticelli's Venus and Mars. The fame of the latter makes it a significant attraction for visitors. Yet those who shuffle past Cosimo's canvas miss an intriguing work, not just for its enigmatic content but for the unexpected way it shows how art can be opened up through scientific scrutiny.

The painting shows a young woman, half-clothed, lying on the ground as a satyr crouches over her corpse. According to the gallery's guidebook, the work – A Satyr Mourning over a Nymph – depicts the death of Procris, daughter of the king of Athens, who was accidentally killed by her husband Cephalus during a deer hunt. Put "death of Procris" into Google and the search throws up countless versions of Cosimo's painting.

But Professor Michael Baum, one of Britain's leading cancer experts, and a keen art critic, will have none of this. "This is not a depiction of the accidental death that Ovid wrote about," he says. "It is a painting about a murder, and a very nasty one at that."

Baum's interpretation is based on artistic and medical sleuthing which he has been carrying out for the past two decades. Every year he organises an artistic "ward round" for his students, one that takes them through the rooms of the National Gallery in order to show them how medical and scientific knowledge gives a new perspective to classical paintings – and to show how art can provide new insights for a young doctor.

"Dozens of papers have been written up, and published in respected journals, by our students on subjects that range from syphilis to Paget's disease of the skull as a result of the observations they have made in the gallery," says Baum. "It's a great way to learn medicine and appreciate art."

Now Baum, visiting professor of medical humanities at University College London, is widening his audience. At the British Science Festival in Bradford, he will give a lecture, Picture of Health: The Art of Medicine, which will highlight the importance of art in medical practice, and vice versa, and which will be based on his science tours of the National Gallery, including his studies of Cosimo's painting.

"The official guide explanation that accompanies A Satyr Mourning over a Nymph indicates that it shows a woman who has been killed after being struck accidentally by a spear," says Baum. "This is consistent with the story of Procris and Cephalus. However, there are all sorts of clues that show this interpretation to be wrong.

"Look at her hands, for example. Both are covered with deep lacerations. There is only one way she could have got those. She has been trying to fend off an attacker who has come at her, slashing in a frenzied manner with a knife or possibly a sword. Certainly there is no way that a spear could have done that."

There are other clues, adds Baum. The woman's left hand is bent backwards, in a position known by surgeons as "the waiter's tip", typical someone who has received a serious injury at points C3 and C4 on the cervical cord. The severing at these points causes nerve damage that makes the wrist flex and the fingers curl up in the manner of a waiter taking a backhanded tip.

"The wound in her throat also corresponds to the idea that her cervical cord was severed at the C3/C4 position. So what we are looking at is a picture of a woman who has had her throat cut after desperately trying to defend herself from a knife-wielding killer. This is not the outcome of a romantic tragedy. This is the result of a brutal murder."

Intriguingly, Cosimo may still have been trying to depict the death of Procris, adds Baum. The painter may simply have been the victim of his own acute observational powers. "I think he may well have gone to a mortuary and asked to be allowed to paint the body of a young woman and got the body of one who had been murdered by knife – and so he faithfully put on to his canvas what he saw. It just happens not to accord with our modern understanding of what would have happened to a woman struck accidentally by a spear."

The key point of teaching medicine in this manner is that it broadens students' views of their subject. "Art and medicine have parallel histories: accurate drawings of dissections were crucial for anatomical education, for example, while art therapy has provided patients with powerful cathartic releases. And now when we look with a trained eye, it is clear these artists had considerable medical knowledge and often used it with considerable subtlety."

The detailed unravelling of the symbolism behind An Allegory with Venus and Cupid is the handiwork of Christopher Cook, one of Baum's students, and is outlined in a paper in the Journal of the Royal Society of Medicine. "In the 50 years prior to the Allegory's conception, Europe was introduced to a new disease – syphilis," states Cook in his paper. "Within the classical mythology and stylised imagery of the Allegory lies Bronzino's health message; with unchaste love comes not only joy and pleasure but also painful consequence."

Other diagnoses in Baum's "ward round" of the National Gallery include Massys's An Old Woman (or The Ugly Duchess), whose strange appearance is given fresh scientific analysis with a little help from Leonardo da Vinci; a self-portrait of Rembrandt aged 63, whose subtle red spots on his cheeks and dilated blood vessels under his right eye indicate that he was suffering from rosacea, a permanent reddening of facial tissue; and Joseph Wright of Derby's An Experiment on a Bird in the Air Pump, which depicts the first flowering of proper physiological experimentation.

And, finally, there is a stop at Holbein's The Ambassadors, a powerful, enigmatic depiction of two 16th-century nobleman that is distinctive for its use of anamorphosis, a distorted perspective that provides a key to understanding a cryptic message. In this case a streak across the bottom of the canvas is revealed to be a human skull when viewed from the lower right-hand side of the painting.

"Essentially, Holbein was inviting people to stand in this position and, from there, the painting's message becomes a bit clearer, though it still takes considerable analysis to work out what is going on. In fact, it turns out to be a coded warning to Henry VIII – to whose court these two ambassadors had been sent – about the dangers of damnation he faced in breaking away from the Catholic church.

"However, the main reason for showing this work to medical students is to stress the importance of good observation and to be on guard for clues. A disease's symptoms are often confusing, and it is vital to take note of everything that is being presented. Holbein had a lesson for us all."

Seen through Baum's eyes, the entire National Gallery looks more like a doctor's waiting room: Monet's paintings, which grew darker and darker until his cataracts were operated on and his works brightened again; Van Gogh's disturbed canvases, which suggest madness induced by syphilis; and the works of Renoir, which were completed despite the fact he was crippled with rheumatoid arthritis and could not lift a brush above shoulder height. "We have works by the world's best painters here and they tell us so much about the human condition. Rather than take away from that, science and medicine actually add to this appreciation," says Baum.

An Old Woman (The Ugly Duchess) by Quinten Massys, c.1513 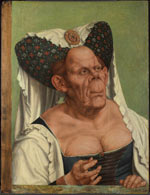 In contrast to most renaissance works, this figure is notable for her grotesque appearance. It was thought to be a mocking comment about old women who go to ridiculous lengths to recreate their youth. Not so, says Baum. This was almost certainly a specific woman (who may also have been depicted by Leonardo da Vinci) who suffered from a rare medical condition. The sunken eyes, the deformed hands, the unusual distance between her upper lip and nose, distorted nostrils and other features are all consistent with the bone ailment Paget's disease. "This was not a satire but a depiction of an individual with a specific disease," says Baum.

The Ambassadors by Hans Holbein the Younger, 1533

Jean de Dinteville and Georges de Selve were ambassadors for France, and superficially this is a standard double portrait. But the strange instruments behind them, the distorted skull at their feet, and other objects suggest a deeper message. "There is nothing medical here but the techniques needed to decode the work are similar to those needed to unravel medical conditions," says Baum. "What gives the painting away is the tiny crucifix in the top left and the instruments between the two men. Analysis show these devices are pointing to the date of Easter 1533 when it was thought the Second Coming would arrive. It was intended to be a warning those, Henry VIII included, who would suffer if they broke from the church of Rome before that day.

An Allegory with Venus and cupid by Agnolo bronzino, c.1540-50

Crucial to understanding Bronzino's Allegory are the images painted around the main figures of Cupid and Venus. A cherub stands on a bed of nails and clearly feels no pain. "This is the condition tabes dorsalis and it is caused by tertiary syphilis," says Baum. "In addition, the broken arrow in Venus's right hand is a symbol of impotence while in the top left of the canvas, a woman's profile has been painted - with the back of her head missing. She has lost her mind, in short." Below this figure, a toothless man clutches head; his reddened fingers and patchy hair are also symptoms of syphilis. "The work may seem erotic but it is really meant to be a warning about the dangers of sexual disease."