When will the US and the UK tell the truth about Israeli weapons?

When will the US and the UK tell the truth about Israeli weapons? Iran isn't starting an atomic arms race, it's joining one

George Bush and Gordon Brown are right: there should be no nuclear weapons in the Middle East. The risk of a nuclear conflagration could be greater there than anywhere else. Any nation developing them should expect a firm diplomatic response. So when will they impose sanctions on Israel?

Like them, I believe that Iran is trying to acquire the bomb. I also believe it should be discouraged, by a combination of economic pressure and bribery, from doing so (a military response would, of course, be disastrous). I believe that Bush and Brown - who maintain their nuclear arsenals in defiance of the non-proliferation treaty - are in no position to lecture anyone else. But if, as Bush claims, the proliferation of such weapons "would be a dangerous threat to world peace", why does neither man mention the fact that Israel, according to a secret briefing by the US Defence Intelligence Agency, possesses between 60 and 80 of them?

Officially, the Israeli government maintains a position of "nuclear ambiguity": neither confirming nor denying its possession of nuclear weapons. But everyone who has studied the issue knows that this is a formula with a simple purpose: to give the United States an excuse to keep breaking its own laws, which forbid it to grant aid to a country with unauthorised weapons of mass destruction. The fiction of ambiguity is fiercely guarded. In 1986, when the nuclear technician Mordechai Vanunu handed photographs of Israel's bomb factory to the Sunday Times, he was lured from Britain to Rome, drugged and kidnapped by Mossad agents, tried in secret, and sentenced to 18 years in prison. He served 12 of them in solitary confinement and was banged up again - for six months - soon after he was released.

However, in December last year, the Israeli prime minister, Ehud Olmert, accidentally let slip that Israel, like "America, France and Russia", had nuclear weapons. Opposition politicians were furious. They attacked Olmert for "a lack of caution bordering on irresponsibility". But US aid continues to flow without impediment.

As the fascinating papers released last year by the National Security Archive show, the US government was aware in 1968 that Israel was developing a nuclear device (what it didn't know is that the first one had already been built by then). The contrast to the efforts now being made to prevent Iran from acquiring the bomb could scarcely be starker.

At first, US diplomats urged Washington to make its sale of 50 F4 Phantom jets conditional on Israel's abandonment of its nuclear programme. As a note sent from the Bureau of Near Eastern Affairs to the secretary of state in October 1968 reveals, the order would make the US "the principal supplier of Israel's military needs" for the first time. In return, it should require "commitments that would make it more difficult for Israel to take the critical decision to go nuclear". Such pressure, the memo suggested, was urgently required: France had just delivered the first of a consignment of medium range missiles, and Israel intended to equip them with nuclear warheads.

Twenty days later, on November 4 1968, when the assistant defence secretary met Yitzhak Rabin (then the Israeli ambassador to Washington), Rabin "did not dispute in any way our information on Israel's nuclear or missile capability". He simply refused to discuss it. Four days after that, Rabin announced that the proposal was "completely unacceptable to us". On November 27, Lyndon Johnson's administration accepted Israel's assurance that "it will not be the first power in the Middle East to introduce nuclear weapons".

As the memos show, US officials knew that this assurance had been broken even before it was made. A record of a phone conversation between Henry Kissinger and another official in July 1969 reveals that Richard Nixon was "very leery of cutting off the Phantoms", despite Israel's blatant disregard of the agreement. The deal went ahead, and from then on the US administration sought to bamboozle its own officials in order to defend Israel's lie. In August 1969, US officials were sent to "inspect" Israel's Dimona nuclear plant. But a memo from the state department reveals that "the US government is not prepared to support a 'real' inspection effort in which the team members can feel authorised to ask directly pertinent questions and/or insist on being allowed to look at records, logs, materials and the like. The team has in many subtle ways been cautioned to avoid controversy, 'be gentlemen' and not take issue with the obvious will of the hosts".

Nixon refused to pass the minutes of the conversation he'd had with the Israeli prime minister, Golda Meir, to the US ambassador to Israel, Wally Barbour. Meir and Nixon appear to have agreed that the Israeli programme could go ahead, as long as it was kept secret.

The US government has continued to protect it. Every six months, the intelligence agencies provide Congress with a report on technology acquired by foreign states that's "useful for the development or production of weapons of mass destruction". These reports discuss the programmes in India, Pakistan, North Korea, Iran and other nations, but not in Israel. Whenever other states have tried to press Israel to join the nuclear non-proliferation treaty, the US and European governments have blocked them. Israel has also exempted itself from the biological and chemical weapons conventions.

By refusing to sign these treaties, Israel ensures it needs never be inspected. While the International Atomic Energy Agency's inspectors crawl round Iran's factories, put seals on its uranium tanks and blow the whistle when it fails to cooperate, they have no legal authority to inspect facilities in Israel. So when the Israeli government complains, as it did last week, that the head of the IAEA is "sticking his head in the sand over Iran's nuclear programme", you can only gape at its chutzpah. Israel is constantly racking up the pressure for action against Iran, aware that no powerful state will press for action against Israel.

So when will our governments speak up? When will they acknowledge that there is already a nuclear power in the Middle East, and that it presents an existential threat to its neighbours? When will they admit that Iran is not starting a nuclear arms race, but joining one? When will they demand that the rules they impose on Iran should also apply to Israel?

I'm nervous, all the anticipation has got me adrenalyzed. On the 22nd we'll have the great opening of the exhibition I co-curated at the Museum. It's been a daunting task because putting together a great show about art and fashion has proven to be more difficult than how we had originally thought, especially with the very little money we were given and the whimsical changes we were ordered by the big boss. It'll be the most important thing I had done, professionally speaking, and hopefully will be the beginning of many interesting curatorships by yours truly in the future. It's been a very full year, with some lows but also some remarkably very high highs. I have a lot of stress ahead also, for the semester is coming to an end, and there's papers to be written and submitted to the tutors, and all that. There's also a couple of other important choices I need to be clear about, and very soon, and that will take time. On the mean time, I shall decisively celebrate this small huge thing; my first exhibition. Gosh, the things one does for attention!
Publicado por Marco Antonio Silva Barón en 7:38 p. m. Cap comentari: 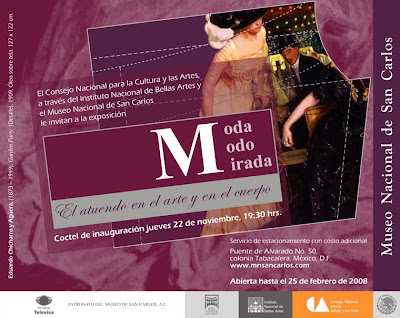 It seems we have to get used to it. To suddenly have the whole country in dispair because neglect, and the climate circumstances currently going on have left a million Mexicans with no home, or with a flooded one or both, and with no immediate source of income or insurance or anything of the sort. Also, as always we have to deal with a State corrupted to the bone, with governments coming and going, but with public servants uncapable of looking beyond their tenure and plan ahead. We've had dozens of Tabascos, and surely more are waiting to be listed. We have lists of tragedies, thousands of dead. And at least half of the country still acts like there's nothing going on. Let's see, we've had earthquakes, explotions, floods, hurricanes, guerrillas and everything in between. What's next? more rounds of the former and perhaps enhanced forms of the latter. But as always, we'll carry on. Civil servants will come and go. And then there'll be no more worrying. Living for the moment. Who cares if we lose everything in the future.
Publicado por Marco Antonio Silva Barón en 10:38 p. m. Cap comentari: